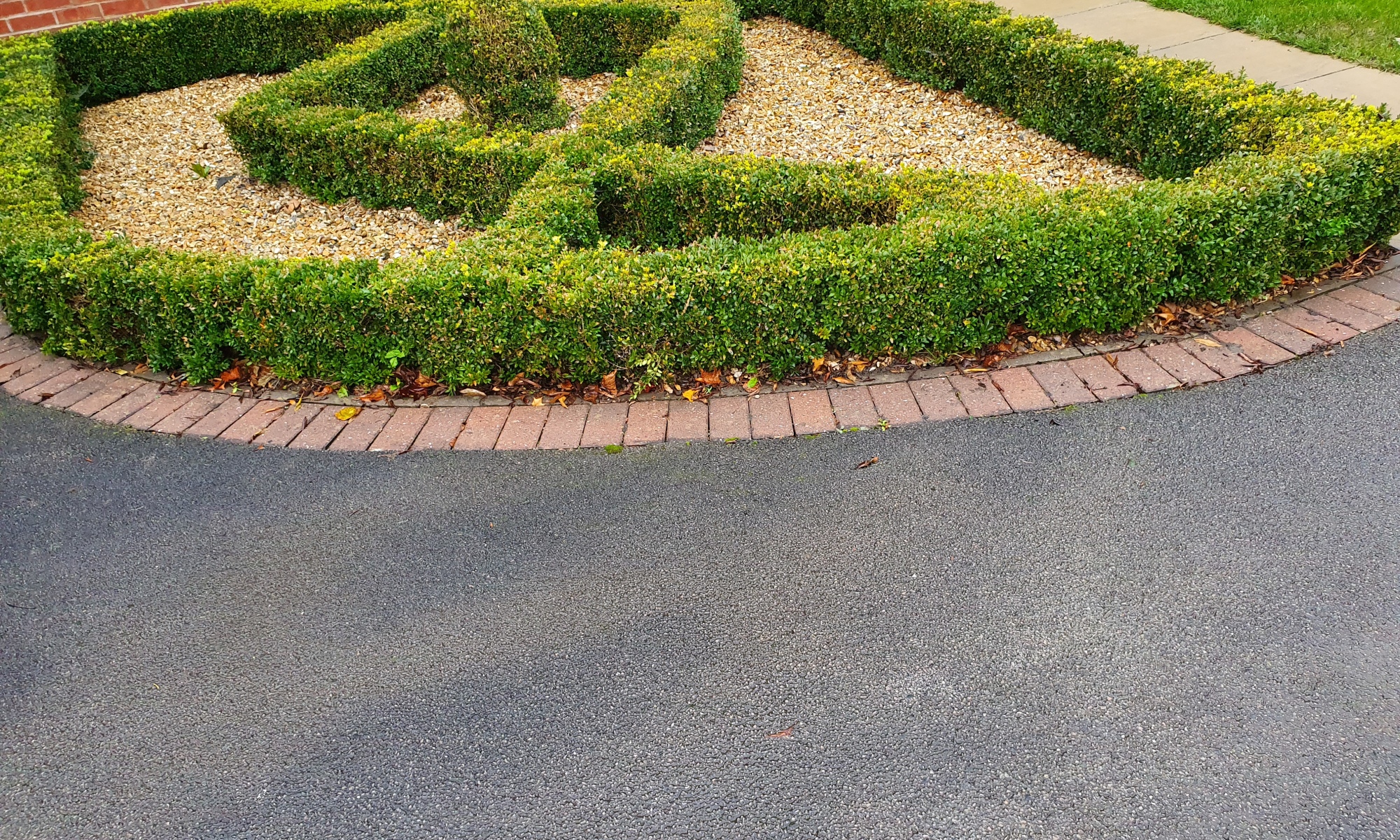 A strange week this week,revisiting the second garden I created 15 years ago. It was nice to see the front border is doing well. It probably could have had a couple more diagonal lines of hedging but the brief was for a low maintenance front garden that was different from everyone elses on the newly created estate. Luckily it still fits that brief, even if the ball in the middle might need a little reshaping.

This was such a spindly little twig when it was planted. It is nice to see it maturing well. Prunus serrula is a beautiful tree with shiny red bark, good autumn colour and cherry blossom in spring.

The very basic, original plan put the patio controversially, not running out from the house but away on one side where it got more sun. There was an easy path to take food from the kitchen to eat outside but there was also nice planting to look at when sat in the conservatory and the house was screened by the plants when sat on the patio. It still left room for a decent lawn for the kids too.

The real reason for my trip down memory lane, was due to an extension. Which was going to take up half of the original planting and change the design of the remaining garden. I had to dig up and save some treasured plants before the builders got in so we could replant them in the remaining space.

Moving mature plants is always risky. As a rule of thumb the roots extend as far as the canopy of leaves. Dig round in a big circle slowly, you can always move further in if it is safe. then dig down freeing as much of the root as you can. It’s the little fibrous roots that are the important ones . You will never get them all out and may need to prune the top next spring if the top growth has died backa little. Make sure the roots do not dry out and get it planted in its new position as soon as possible. Add some manure or well rotted compost as an apology for digging it up and hopefully it will settle back in well and forgive you! Keep an eye on the weather all next year moved plants may need some extra watering help in dry spells. I would have waited until the tree was dormant ideally but the builders start next week and I didn’t trust them anywhere near anything I wanted to live!

Euonymus are a really underrated Genus of shrubs. Now is there time to shine in the garden and I want to take a minute to appreciate them. At this time of year they have it all, amazing seed pods, vibrant leaf colour and interesting bark. Let’s start with the work horse, Euonymus fortunei, my favourite of these is ‘Emerald Gaiety’ although there are many more varieties with the same leaf colourings, of white and green, turning to pink at the tips in the winter. Such as ‘ Silverstone’ which has tiny leaves but the same traits as ‘ Gaiety’ This plant provides the perfect foil to lots of other far more exciting plants. I like underplanting Cornus ‘Sibirica’ with it so it helps the red stems stand out. or just using it as a contrast with lots of green foliage.

My favourite of the Euomymus must be E. planipes. It doesn’t have the interesting bark of alatus but its seed pods are amazing. I haven’t managed to get a picture but there is a good one here https://pin.it/flohticmhunsrp

on the 22nd October The Guardian put out a call for readers to send in pictures of plants flowering now that shouldn’t be. With a view to making a picture gallery of results that could help to show more effects of climate change on our plants. I always thought it was usual in Autumn to find some spring flowers having a second flush because the temperature and light levels are so similar to spring that the plant sometimes thinks its flowering time. I often find spring Ceanothus, and Primula having a second flush. Also some perennials,such as, Papaver orientalis, Delphinium, Lupinus, can have a second flowering. If you cut them down early enough and the conditions are right. but after reading the article I started to look for anything out of the ordinary and found a Rhododendron with a couple of flowers.

The plant seems perfectly fine, so it isn’t stress related. Is it just the weather fooling it or is it climate change and a result of warmer winters as the Geophysical Research suggests. Perennials have always recovered fine and still managed to flower the following year even if they flower twice and shrubs very rarely have two full flowerings the second one is usually very sparse and should not cause too much damage. The worry I suppose is if the plants are flowering twice and not having a dormant period in the winter because it isn’t cold enough. Then eventually they will run out of energy. Which we will need to adapt to this and replenish the plants energy. The further problems that stem from plants flowering at unusual times is the potential for the pollinators not to be present when the flowers are and that very important relationship will be broken for both the plants and the insects. With potentially disastrous consequences. So have a wander round and see if you can spot anything out of the ordinary going on in your garden.

As it was Guy Fawkes night this week I will leave you with a firework shot to get us all through this miserably wet day. Happy days in the Garden x